The Race to the South Pole

In 1911 the race between the expeditions of the Norwegian Roald Amundsen and Briton Robert Scott to the South Pole began, each of them dreaming to reach the southernmost point of the earth first. In the end, Amundsen succeeded whereas Scott died heroically in the icy desert with his comrades on their way back after arriving at the Pole second.
The concept of this Mapping project was to create a device which, through interaction by the user, tells the story of Race to the South Pole. The goal is to reveal the explorers’ progress and struggles across the frozen continent through a physical device, a wheel chart, which is made up of a stack of rotating discs. As the user turns one of the discs the pointer running along the outside points to particular events of the expeditions. Information associated with these events such as changes in temperature and terrain hight, as well as human and animal tragedies, will become visible. At the same time points showing positions of each expedition can be viewed through the track windows. 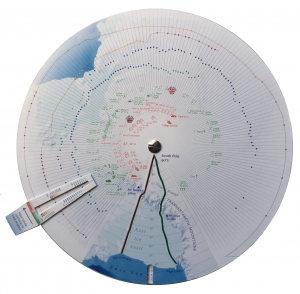 The back side contains an overview map, where territories known at the time of the expeditions are shown as highlighted areas. 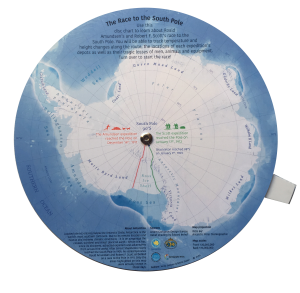